Many real estate pundits have been pounding the table for years that the U.S. real estate market is on the verge of collapse.

They were wrong then, and they’re wrong now.

First off, there is no such thing as a “U.S. Real Estate Market.”

You can only invest in specific, local markets.

There are 400 major metro markets. They account for more than 93% of all U.S. real estate.

EACH local market is unique.

Some are emerging, some are red hot, and some are sucking wind RIGHT NOW.

As an investor, what matters is YOUR local market, not some national average of all 400 markets.

There ARE some big ‘failures’ this quarter you should be aware of.

Here’s a screenshot of our “Market Tracker” tool showing the EIGHT markets that fell out of their WEALTH PHASE this quarter.

(If you don’t know what a Wealth Phase is, you can read about it here. It’s a BIG DEAL when a major market enters or exits a wealth phase.) 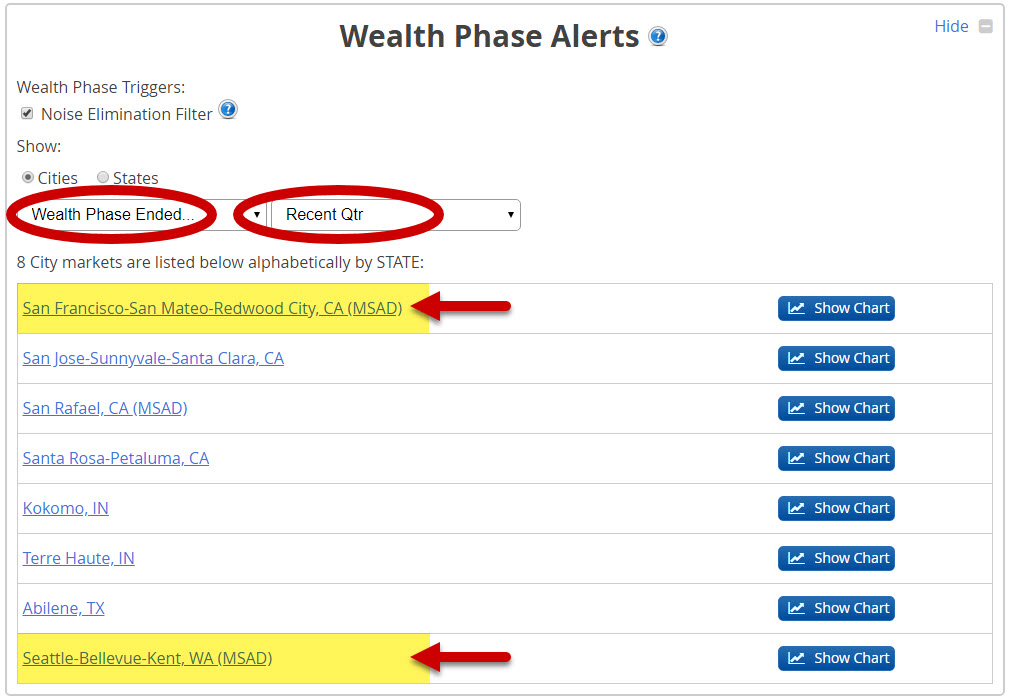 Note that San Francisco and Seattle exited their Wealth Phase in the most recent quarter.

Both markets were bellwethers back in 2013; they were among the first major real estate markets to turn around.

Could these markets now be signaling what’s ahead? 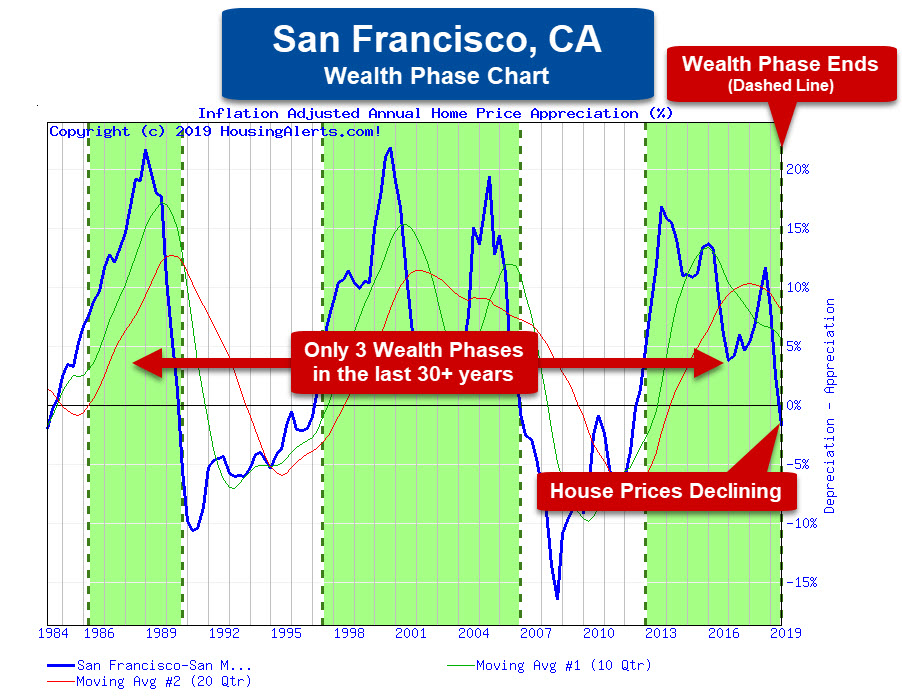 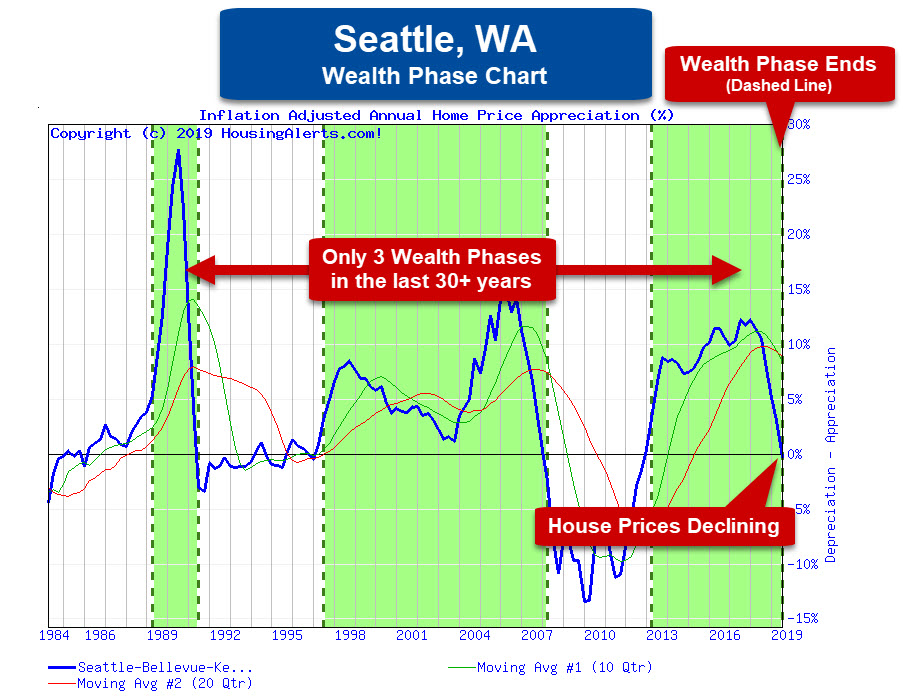 San Francisco real estate gained a cumulative 86% total appreciation (69% when you adjust for inflation) since it entered its Wealth Phase in 2013.

Seattle gained 82% in total appreciation (66% when you adjust for inflation) since it started its wealth Phase.

Now they’re both starting to LOSE some of those gains.

In the first screenshot above, you’ll also see that 4 of the 8 markets falling out of their Wealth Phase were in California.  This should come as no surprise if you’ve followed HousingAlerts for very long. We noted the California weakness several years ago.

Using our S.T.A.R. Momentum Indicator, here’s what we saw in California as early as 2016… 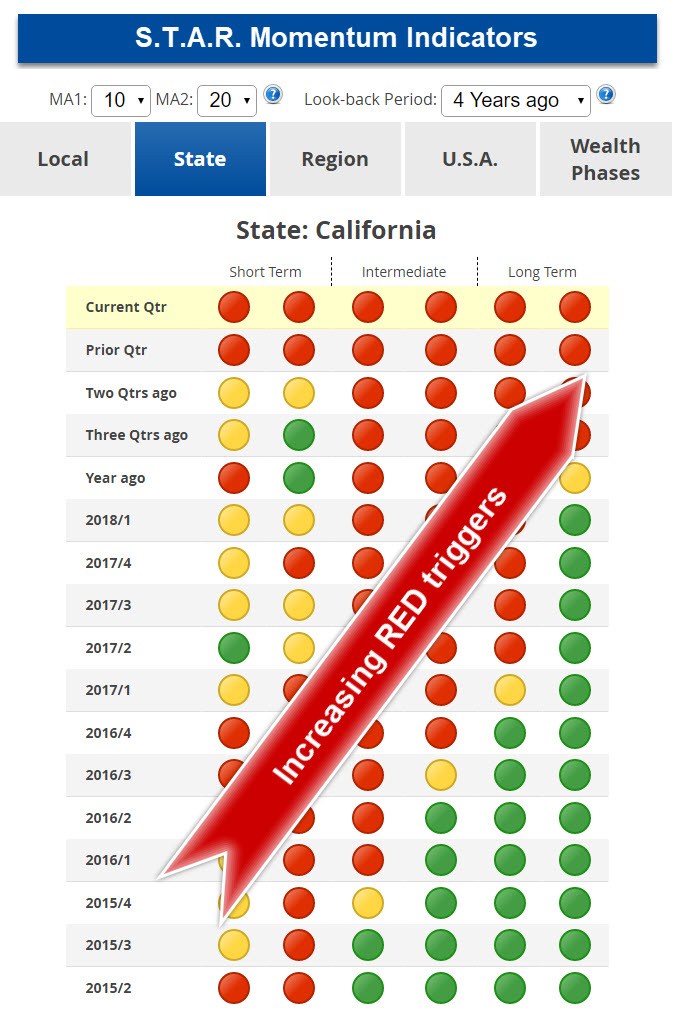 Think of these Red, Yellow and Green icons as ‘traffic lights’ – so long as they stay green, you’re in good shape.

If you start seeing RED replacing GREEN, especially going from left to right over time, it means momentum is weakening.

These momentum indicators are pretty good at predicting major market changes, often years in advance, as it did above for California.

Except for Chico, CA, almost every other major California real estate market is doing poorly relative to the rest of the country.

It’s been said: “California sets the trend” when it comes to real estate.

I don’t buy-in to those types of generalizations, but California WAS an early participant in the last two major market upswings and was also on the leading edge of the last major downturn.

The good news is…

You don’t have to trust your retirement to conjecture; with HousingAlerts, you can eliminate the guesswork and rely on cold hard data.

We have been rolling out some amazing new micro market tools for Wholesalers and Rehabbers. Our Neighborhood Ranking tool alone should save you thousands a month in targeted acquisition and lead generation costs. Click here to buy now.

The Real Deal
Thanks for yet another straight forward video. No fluff and not too repetitious. I too am in my 50s and need accurate info quick. I am done playing with the knee jerkers, the one shot wonders and flavor of the month gurus. You are the real deal. Keep it up.
Pete
Exciting & Revealing Program!
I’ve worked in the real estate industry for 30 years, basically a transactional broker, this program is exciting and reinforces my beliefs regarding real estate investing. The videos also break some long-standing investing rules which, frankly, needed to be broken. Good stuff. Thanks!
Dennis Erickson
Great Tools For Investors!
What great info. The tools in this program are sure to make anyone who can see colors or follow arrows, a successful investor. I’m looking forward to the updated and new tools.
Andy Sager
Amazing Training – Thank You
I just wanted to say this is a great program you have created and I am glad to find this information before buying into all of those seminars. All those get rich seminars tell you the how to, but don’t tell you whether it is the right market to use their product. Thank you for these amazing videos.
Kyle
Highly Recommended Training!
Great information on real estate. I have learned so much from your wealth of knowledge. Looking forward to learning a lot from your webinars. Thanks for your being so liberal with well needed facts in real estate.
Wycliffe Reid
Great Information
Wish I knew about this years ago. It’s very interesting an exciting to listen to someone who knows what they are talking about. Looking forward to joining the webinar.
Jean
Great Investing Advice!
This is great information. I am an Investment Real Estate Agent in Virginia and I have taught many investors how to make money from buying and selling properties. This is great advice. I am glad someone is talking a different tune and not just selling the CD’s etc. Good advice is hard to get…..so listen up as this is important information.
Jan Boyer
Watched It Twice!!