This next example is going to tick off the 600 pound gorillas in my space: FiServ Lending Solutions, along with CNN-Money.com and Fortune magazine.

FiServ handles all the big banks and Wall Street firms – I’m a little peon compared to them.

But what the hell, you deserve to know the truth… so here goes…

CNN teamed up with FiServ to publish a detailed local market analysis. They used the same, outdated techniques everyone else uses to predict real estate cycles – the same methods that I keep saying will never give you accurate or timely, actionable advice.

They did a similar prediction more recently – but that’s the thing about real estate predictions – you’ve got to wait several years to prove them wrong. Unless you’ve got some weird passion or genetic wiring for this stuff, most people forget all about it… and the publishers continue putting out uncontested garbage. 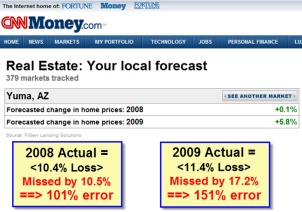 Check out this example. This comes from their December 8, 2007 website. The comments in the two boxes are mine – they show what actually happened.

Folks, these are home prices we’re talking about, it’s not like trying to predict a roulette wheel that has a wild variance. How can you predict a housing market to increase 6% and have it decline 11% – and still call yourself an expert?

..and then keep making the same mistake over and over for all these other markets?

In Yuba City, California, they called for a 5% decline the next year when it was actually 28%!!!

Let me flip through some more real quick… Focus on the SIZE of their error for each one… the red text shows what they missed it by.

Want to see the SHOCKING PROOF? I’ll Show You in my latest Real Estate Market Report

Great Information
Wish I knew about this years ago. It’s very interesting an exciting to listen to someone who knows what they are talking about. Looking forward to joining the webinar.
Jean
Exciting & Revealing Program!
I’ve worked in the real estate industry for 30 years, basically a transactional broker, this program is exciting and reinforces my beliefs regarding real estate investing. The videos also break some long-standing investing rules which, frankly, needed to be broken. Good stuff. Thanks!
Dennis Erickson
This is Eye Opening Content!
Knowing market phases in real time, local market indicators, total market master, will let a person make money in their own up market and when that goes, go on to another up market! Good job Ken!!!
Larry Hoover
Watched It Twice!!